I found this interesting little tidbit at Topps.com today.  If you’ve always dreamed of owning a Gov. Palin card your dreams may come true.  These beauties will be inserted in the 2008 Topps Highlights & Update packs.  You can either find this Alaskan beauty queen card or the other version with a picture of what she looks like today.  I’m still trying to figure out why I go to buy a pack of baseball cards, and instead of getting a future HOF or a young stud rookie, I get a politician.  Does this annoy anyone else?  I can see the reason behind all the inserts in the Allen & Ginter set, but this is a Topps baseball card set.  If people want political cards, release a set of cards picturing the Senate and Congress.  I can guarentee if I pull this card It will end up on E-bay before I open the next pack!!  The sad thing is this card will fetch more money than any other card in the release.  I still can’t believe this lady has a chance at being the VP and a damn good chance of being promoted to President.  Let’s face it, McCain is reaching his expiration date.  If this happens I bet this card will skyrocket.  On second thought maybe I will hold on to it for a while if I do pull it.

4 More Bricks in the Wall

I can’t stand to watch the Cubbies boot the ball around the infield like a bunch of little leaguers (no offense little leaguers) so I thought I would post my new additions.

The first card is “Billy Joe” Adcock.  Being a child of the eighties there are a lot of players in this set I know absolutely nothing about.  This is one though that I have heard of.  Joe ended his career with 336 home runs, 4 of them in a single game where he set a new total base record of 18 total bases.  He would of finished with 337 home runs if Hank Aaron would of finished running the bases on a game winning home run, instead he was credited with a double.  That hit came in the thirteenth inning breaking up a 12 and 2/3inning no hitter by Harvey Haddix.  I don’t think we will ever see something like that again.  I wonder what the pitch count was? 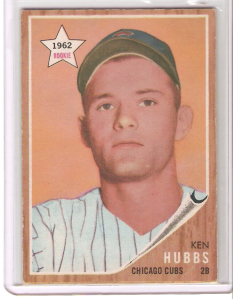 The next card is of the Cubs second basemen Ken Hubbs.  Hubbs became the first Major League rookie to win a gold glove.  He died tragically in 1964 in a plane crash.  If Ken was still with us today we could of used him at 2B tonight.

That brings us to Earl Robinson.  This is one of the guys I know nothing about, but neither does the internet.  All I could find is that he played four seasons with a career batting average of .268.

Some how Jack Curtis came in third for the rookie of the year in 1961 behind Joe Torre, who I hated as a Yankee and hate even more now as a Dodger,  and Billy Williams, but only managed to play for three seasons.  Some things never change for the Cubs.

Ken Hubbs is the jewell of the bunch for me.  I received a reprint of this card at a game in 2002 and always wanted the real deal some day.  That day was today.  At least something good happened today.  The Cubs finally scored a run but I don’t think they’ll pull this one out, I hope so, but probably not.  Any way this bunch cost me a total of $8.01 off the-bay.  Totalling the cost and book value of this set so far has made me realize either, the book value is way out of whack, or vintage cards can be picked up at a bargain.  I think it’s a little bit of both.