Hatchet Buried And Other Random Trades 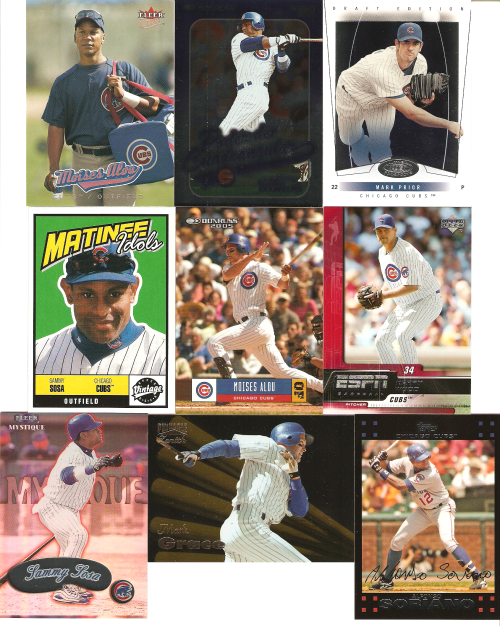 This is a special little trade I made with none other than The Cardboard Fan.  You may recall him from a few posts I have done in the past.  We weren’t, what you would call, very fond of each other.  I even went as far as to call him a few choice words and he returned the favor on a couple of occasions.  His name is actually Mike and he is not as bad of a person as I may have made him out to be.  It seems he collects everything I don’t and visa versa.  It really took a good while to find anything to trade with him.  I finally found a couple of cards off his needs list and sent them his way.  In return he sent this handful of Cub’s cards.  I still don’t think he is a fan of my blog and I doubt he ever will be, but at least something positive has come from all of the bickering back and forth.  Thanks Mike!

The next trade came from Mike from JD’s Wild Cardz.  You may have heard of him, I guess he figured out some puzzle or something recently.  Not real sure what that’s all about, but he found time to send me this little beauty……

I’m not real sure what his mailman is up to, but I don’t think it’s good.  The package I sent to him was attached to a note telling him to buckle up and that he owed his mailman 55 cents for postage.  I know I had the right amount of postage on his package and I was assure it was right from the place I sent it from.  I’m guessing sodas cost 55 cents at the post office break room.  I never really looked at this card too much until just now.  I noticed what I’m sure most of you noticed was the big crease through the middle of the card.  Now I have to say Mike had this card protected as well as any that I have received in the past.  The only person to blame could be his mailman.  Mike, you might want to perform a background check on your mail carrier because I think he might have it out for you.  I’m thinking of taking the jersey swatch out and maybe making a custom GU card out of it.  It can’t be any worse than the big companies attempts at GU cards, right?  Thanks Mike!

I’ve save the best trade for last.  It came from Paul of Carl Crawford Cards.  I helped him out with some ’73 Topps and a few extra goodies.  In return he sent me a cornucopia of ’80’s rookies, a sweet Hammerin’ Hank, and a Ryno I was in need of.  Thanks Paul!

2 responses to “Hatchet Buried And Other Random Trades”