How Boxing Has Changed Over The Last 90 Years

After finally accepting that the Cub’s season is an official wash, I’ve focused my attention on the world of boxing.  Over the last two weeks there were two big fights.  The first featured recently unretired Floyd Mayweather Jr. completely dominating the number two pound for pound fighter in the world, Juan Manuel Marquez.  I thought Marquez might have had an outside shot at this fight only because on HBO’s 24/7, he was featured drinking his own piss while training for the fight.  I figured if he was that hardcore, he might stand a chance.  I was wrong.

The fight from last week was also one sided.  Vitali Klitschko used his size to dominate a tough competitor in Chris Arreola.  Honestly, with a last name like that you would probably have to grow up tough.  In the end Arreola just couldn’t get past the size difference and was forced to give up in the late rounds.

I have also been watching a ton of old fights on ESPN Classics.  I work second shift and they air their classic fights at just the right time for me to lay in bed and watch some unbelievable bouts.  The one that caught my attention the  other night was the 1919 heavyweight championship bout between boxing legend Jack Dempsey and Jess Willard.  Jess Willard was the biggest heavyweight to hold the title at the time but that did not stop Dempsey from knocking him to the canvas 7 times in the first round.  The round ended with Willard being knocked out cold in the corner of the ring, but he was saved by the bell.  His corner brought him to between rounds and he continued to get knocked around for the next two rounds until he couldn’t continue anymore.  Here is a video of the first round…….

If this were fought out today, this fight would have never gone past the second knock down.  In 1919 boxers were not required to go to a neutral corner after a knock down which allowed Dempsy to tee off on Willard’s head.  If you liked the first round the whole fight can be viewed here.  Willard ended the fight with several teeth knocked out, broken ribs, and a severely broken face.  After the fight I felt compelled to find a nice Jack Dempsey card for my collection.  After a little shopping I was able to add this 1938 Churchman’s card for under $20.  I haven’t decided if I will break it out of it’s plastic when it arrives or not. 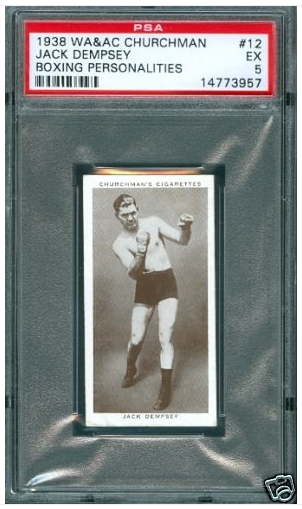