Beckett Proves Their Values Are Inflated 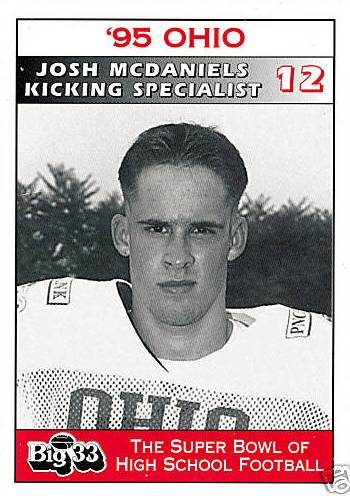 I’ve been a strong critic of the once high and mighty Beckett.  I’ve called them out on several topics from shady business practices to having unrealistic values in their price guide.   Today they have proved to me that their numbers are completely based on fantasy, or at least on eBay.  Tracy Hackler has a write-up on a high school football card of the Denver Bronco’s head coach Josh McDaniels.  You can check it out here.  Give them a few minutes if the page does not load, they’re still in their beta stage of the site.  The article claims his card from the 1995 Ohio High School Big 33 set had a value of just $.75 in January.  Later it rose to $3 and then $5.  Just recently one sold for $26 on eBay.  So what value does Beckett slap this card with?  $10, maybe $15, that would be an honest average of what the card has been worth and what it has sold for right?  Nope, they decided it is now worth a whopping $30.

I know they make the argument of scarcity and how surprising of a storyline the Broncos have been this year but that should not inflate the value of this card by that much.  They even state that it is a 3,500% jump in value in 9 months.

Whenever I bring up the argument of book value vs. real world value, I always hear form the Beckett defenders that if a card sells for an unusually large amount on eBay, it shouldn’t affect the book value.  People always state that one out of the ordinary sale should not spike up or drop the book value.  Well in this instance one sells for $26 and they value it at $30.  Why the extra $4?  My theory is they added in the shipping charge into the value.  This contradicts another popular argument about eBay vs. book value.  That eBay shouldn’t have an effect on value because of the variables such as shipping charges, time of day, and the day of the week an auction ends on. These all affect the final purchase price of a card but it should not have an effect on the value.  If they want to value this card at $30 that’s fine by me.  All I’m really trying to say is if this card is worth $30, a ’89 Donruss Griffey RC should be worth $.25 and not $8.  Right?  The next time I hear someone mention that eBay shoud not be the be all, end all price, I’ll be quick to point to this card to end the argument.

9 responses to “Beckett Proves Their Values Are Inflated”