And I’m not going to show them because they were Chicle and everyone has posted them to death.  They were however the first new cards I have bought since Topps Series One was released.  My wife and my wallet are liking this exclusivity thing.  Lucky for both of them Chicle didn’t really trigger anything from me to make me want to buy any more.  I will be ordering a jumbo box of Series Two real soon and then after that it’s nothing but vintage for the rest of the year.   I did receive a supercool card in the mail completely unannounced.  My wife ordered me a subscription to Vine Line for my birthday.  If you don’t know what that is, it’s the Cub’s state run propaganda magazine the comes out every so often.  I guess with every subscription they send out a free gift.  Here’s what they sent me. 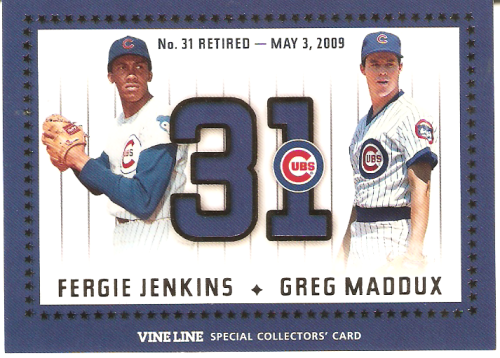 The card looks way better in person than it does in the scan.  They went bat shit crazy with silver foil and it makes for an impressive looking card for the two greatest pitchers ever to wear #31.  The card comemorates their number retirement ceramony which I was lucky enough to attend last year.  It’s also serial numbered to 13,500.  Yeah, so it’s not really as limited as they would like me to believe.  Interesting enough though, I can’t find a single one like it for sale anywhere.

I also wanted to show off my set of the Infinite Baseball Card Set.  If you haven’t already go here and tell him how cool his cards are and get your own set.  You will not be disappointed. 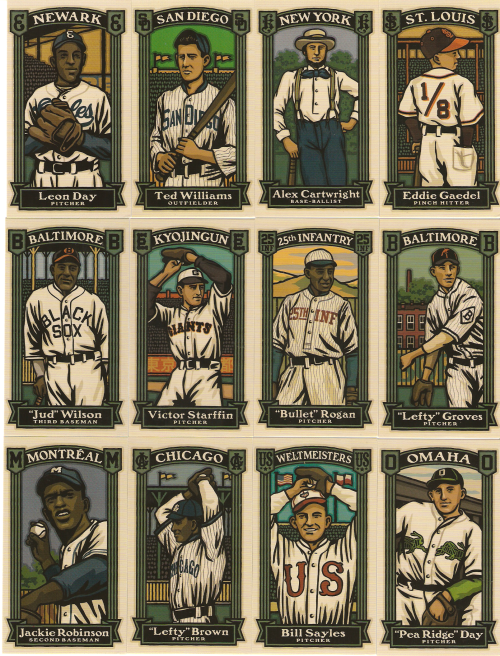 Each set is numbered and I believe they are limited to 1000 copies.  Mine was number 62.  How cool was that?  So there you have it, the last two cool things I’ve picked up in over a month.